The Laser That’s Changing the World

Todd Neff has written the first comprehensive book on the development of 3D laser scanning and lidar. 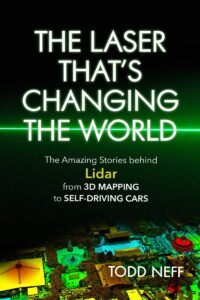 I think I may have reached the peak of my literary career! No, I haven’t written a book, or even a chapter of a book, but the folks at Prometheus Books have been kind enough to include my “blurb” on the back cover of Tom Neff’s interesting and important, The Laser That’s Changing the World.” My mother would be so proud.

Where to begin? Well, if you want the inside story on the development of lidar and 3D laser scanning from the early 1900’s through the present than this book is a must read.

It includes a discussion of the technology as well as the individuals who turned physics into commercial products. Now when someone asks you what this “lidar thing” is all about you can point them to Neff’s book for a detailed explanation.

Neff says Edward Hutchinson Synge, known as “Hutchie” born in 1890 in Dublin, Ireland was where it all started. Of course the ruby laser was not involved since that was not invented until 1960. The light source in the early days was flashlights. Hutchie’s first important invention involved extending the resolution of microscopes. This was supported by none other than Einstein himself.

For his second effort he luckily for us turned to the heavens. He was interested in studying the upper atmosphere as he felt this would be of importance to meteorologists. His method was to use searchlights from a mountaintop at night. Some 18 miles away would be a meter-wide reflector that bounced the light into a photodetector. Sound familiar? That was the beginning of lidar.

For the rest of the story, you will have to buy the book which can be purchased here.

Note – If you liked this post click here to stay informed of all of the 3D laser scanning, UAS, autonomous vehicle and Lidar News. If you have an informative 3D video that you would like us to promote, please forward to editor@lidarnews.com.

Like what you see? Next time, let us bring content like this to you by joining our eNewsletter. We will compile all the most important news and send it to your email. It's that easy!

Join our mailing list to receive our weekly eNewsletter along with the latest news and updates, including occasional product and event announcements. By submitting this form, you agree to receive these. Thank you!

You have Successfully Subscribed!